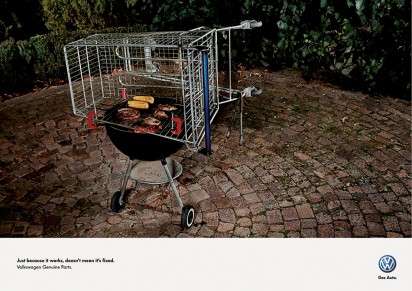 Meghan Young — September 25, 2012 — Autos
References: ogilvy & ibelieveinadv
Share on Facebook Share on Twitter Share on LinkedIn Share on Pinterest
The Volkswagen Genuine Parts campaign appears to have been put together by MacGyver, or at least with his help. Each print ad involves something that had to be fixed. Instead of fixing it the proper way, however, people have decided to get creative. For instance, in place of a classic swing seat, someone has attached an outdoor plastic chair. And a broken faucet has been replaced with a modified tea kettle. Considering that these tweaks don't revolve around life-threatening situations, they are more sad than impressive.