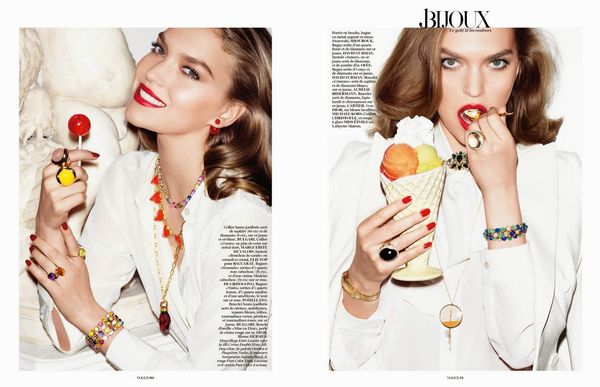 The hip French beauty editorial focus on minimalist and natural makeup looks with a touch of glam. Muse rocked an elegant side-parted wavy hairdo, red lips and thick brows. Having Muse snack on sugary sweets like ice cream, lollipops and cupcakes was a great way to get the viewer to visually focus on the hip jewel-toned rings, bracelets and charms Muse sports on her fingers and wrists. Because Muse was dressed in all white, the viewer's eye goes directly to her bold colored accessories.

The magazine even featured Muse sipping on a bottle of Arizona ice tea as a clever ode to the model's first name, Arizona.
2.6
Score
Popularity
Activity
Freshness
Get the 2021 Trend Report FREE