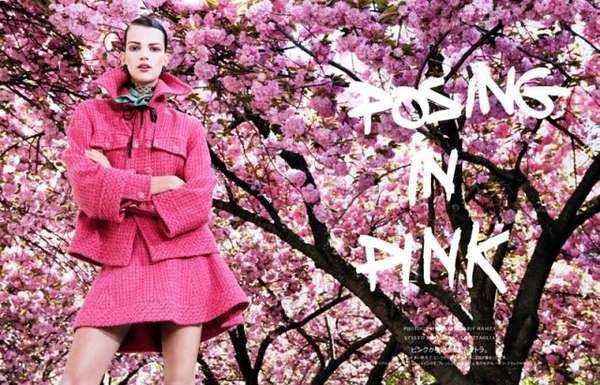 Meghan Young — June 27, 2013 — Fashion
References: vogue.co.jp & fashiongonerogue
Share on Facebook Share on Twitter Share on LinkedIn Share on Pinterest
While the cherry blossom scene in the Vogue Japan 'Posing in Pink' editorial is pretty and whimsical, there is an undeniable edge to the outfits showcased throughout. Yes, they might be as pink as the flowers, but the way model Bette Franke wears them is more femme fatale than girly. Of course, this is due in large part to her attitude and poses.

Styled by Giovanna Battaglia, the looks featured in the Vogue Japan 'Posing in Pink' editorial are very much feminine in an eccentric sort of way, yet the brunette beauty's approach shows that one doesn't have to be prim and proper to appreciate them. Captured at the Botanical Garden in Brooklyn, New York, the wardrobe highlights pink pieces from the likes of Rodarte, Miu Miu and Chanel. Soft makeup complements the looks.
5.6
Score
Popularity
Activity
Freshness
View Innovation Webinars