Costumes for the Curvy 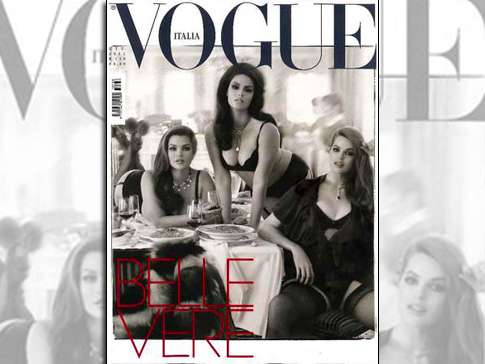 Leslie Chen — June 3, 2011 — Pop Culture
References: nydailynews & highsnobette
Share on Facebook Share on Twitter Share on LinkedIn Share on Pinterest
Even though today's society has learned to embrace all body types, the Vogue Italia June 2011 cover proves that there is still a long way to go. Steven Miesel photographed the image with the three stunning plus-sized models as they lounge around a dinner table seductively.

Inspired by Italian cinema of the 1960s, the Vogue Italia June 2011 cover exudes glamor and class despite the models wearing only lingerie. Models Tara Lynn, Candice Huffine and Robyn Lawley were chosen by the magazine's editor Franca Sozzani because she "likes women to have a little meat on their bones," according to NYDailyNews.com. With the fashion world taking a lot of blame for women's body issues, she feels like this could show the public of their commitment against eating disorders.

Plus-sized or not, women should embrace their figures and the Vogue Italia June 2011 cover is a perfect illustration of just that.
3.7
Score
Popularity
Activity
Freshness
View Innovation Webinars