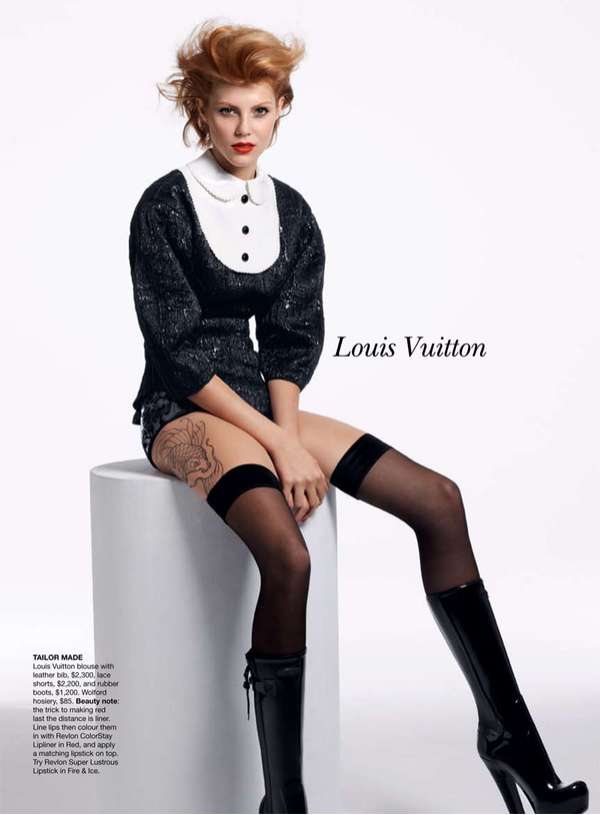 Lydia Willemina is Inked and Irresistible for Vogue Australia August 2011

Jordan Sowunmi — July 7, 2011 — Fashion
References: vogue.au & fashiongonerogue
One look at Lydia Willemina’s face and it’s almost impossible to not immediately anoint her one of the fashion world’s next superstars, as her Vogue Australia August 2011 editorial makes clear.

The Lydia Willemina Vogue Australia August 2011 editorial was shot by fellow Aussie Max Doyle, and features styling from Naomi Smith. Willemina is a fresh-faced new model who was discovered earlier this year while riding the train on her way to work in her native Sydney. In this elegant shoot, Willemina’s soft yet angular face is the star, conveying fun-loving laughter in one shot and a more stony, demure look in the next. This Vogue Australia August 2011 editorial is the first major campaign of Willemina’s career, and she does it while wearing some of the biggest names in fashion, including Lanvin, Prada, Burberry, Gucci, Calvin Klein and Emilio Pucci.

Lydia Willemina is just 19-years-old, and this star-making shoot looks like a solid starting point for what should be a lengthy and successful career.

Implications - One of the best ways a company can standout in their advertising is by featuring models with an aesthetic that is not representative of the majority of mainstream fashion advertising. By latching onto an unfamiliar and nontraditional face, the company embeds the idea of their brand as avant-garde and different from similar companies in its field, which immediately draws interest from consumers seeking some spice to conventional fashion marketing.
6.7
Score
Popularity
Activity
Freshness