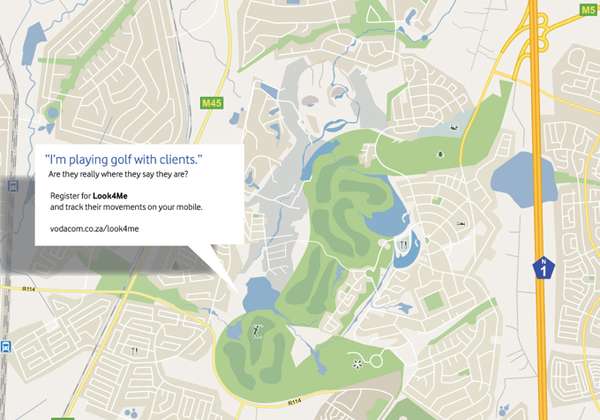 Amelia Roblin — August 11, 2011 — Tech
References: draftfcb.co.za & adsoftheworld
Share on Facebook Share on Twitter Share on LinkedIn Share on Pinterest
The information age has made it increasingly difficult for people to keep secrets, and by the advice of this Vodacom Geolocation campaign, you really shouldn't bother trying to lie. These print ads promote a Vodafone product that tracks the position of your loved ones so that you can find them at all times.

The DraftFCB advertising agency of Johannesburg, South Africa, created these posters with the familiar visual language of Google Maps. A close look however, divulges unusual topographical patterns which picture a stripper, an underage drinker and a surfer out of illustrated waterways, road networks and parks.

Callout captions point to the accurate bearings of a husband and a teenage daughter and son who claim via text that they're golfing, at a sleepover and studying respectively. Of course, this Vodacom Geolocation campaign asserts that only registered numbers will reveal mobile phone owners' whereabouts.
4
Score
Popularity
Activity
Freshness
Attend Future Festival