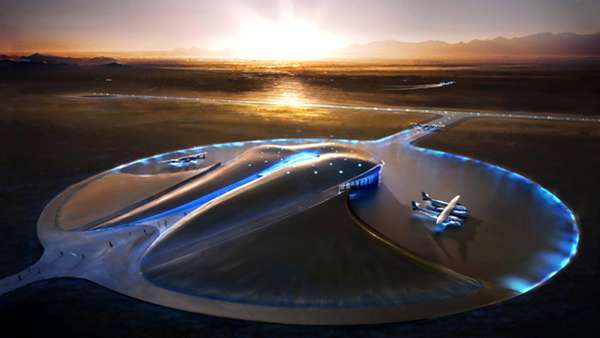 Omar Yusuf — October 19, 2011 — Autos
References: bbc & gizmodo
Share on Facebook Share on Twitter Share on LinkedIn Share on Pinterest
Formerly called the Spaceport America, the newly minted Virgin Galactic Gateway is up-and-running after years of deliberative planning, press exposure and construction. Finally, people will be able to conveniently travel to the stars -- remember to bring your credit card, though!

The space hub set Richard Branson and his innovative tourism company back $210 million; but that initial investment will be remade once the initially planned 450 flights are sold. Each sojourn will last approximately 2.5 hours, boasting five minutes of unadulterated weightlessness and panoramic views of Earth that few people have ever witnessed. It won't be cheap, however -- the asking price for a shuttle ticket out of the Virgin Galactic Gateway is $200,000! For the time being, the spaceflights have been grounded until SpaceShipTwo, Mothership and WhiteKnightTwo all complete testing next year.

So hold your breath and keep your debit card hidden; you'll need spare cash (and air) in space.
2.8
Score
Popularity
Activity
Freshness
Get Better and Faster