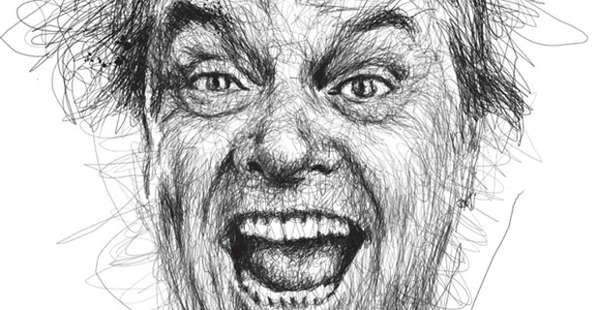 — June 30, 2013 — Pop Culture
References: behance.net & lifelounge.au
Share on Facebook Share on Twitter Share on LinkedIn Share on Pinterest
Vince Low has already garnered a ton of attention for his hyperrealistic celebrity portraits he created in support of a dyslexia research organization. Now, more of his celebrity portraits have been released from his private portfolio, showcasing everyone from Rowan Atkinson to Samuel L. Jackson.

Each celebrity portrait in Low's portfolio was created out of a chaotic mess of scribbles. However, instead of succumbing to the chaos, Low was able to transform this illegible mass of scribbles into eerily realistic celebrity portraits. To make them even more memorable, Low has injected his portraits with a little bit of humor, depicting each celebrity in awkward or humorous positions. Will Smith is shown making a kissy face, Leonardo Di Caprio looks bashfully up at the viewer, and Jack Nicholson makes his iconic, crazy-eyed grin. This helps the portraits take on a quirky quality that sets them apart from other celebrity renderings, while simultaneously cementing Vince Low's name in the pop art world.
3.9
Score
Popularity
Activity
Freshness
Attend Future Festival