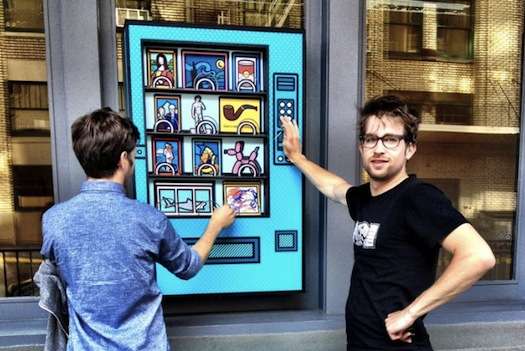 The Vending Machines by Wieden + Kennedy Raise Money for Schools

Sarah Robson — August 9, 2012 — Art & Design
References: wk & psfk
The vending machines by Wieden+Kennedy were part of the ‘Insert Change Here’ event by the advertising firm. Instead of vending machines dispensing candy, the company came up with the inventive idea of selling artworks and merchandise.

The collection of artworks included postcards, stickers, dolls and drawings, and the money raised was then donated to the Sun Community Schools. More than 650 people attended this event, and the vending machines were filled with over $4000.

Wieden+Kennedy is an independent advertising agency that has offices in Portland, New york, Sao Paulo, London, Amsterdam, Delhi, Shanghai and Tokyo. They focus on maintaing great relationship between their company and customers, and are known for their community contributions. This interesting campaign is one of its many creative ways the team has raised money.