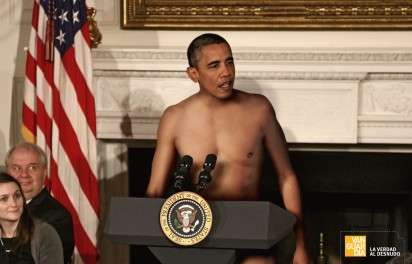 Meghan Young — June 18, 2012 — Marketing
References: ibelieveinadv
Share on Facebook Share on Twitter Share on LinkedIn Share on Pinterest
The Vanguardia Magazine campaign is all about 'La Verdad al Desnudo,' which means 'The Naked Truth' in Spanish. To show how serious it takes this motto, the ad campaign portrays three politicians, Mahmoud Ahmadinejad, Julian Assange and Barack Obama, in a very vulnerable manner. Completely nude except for some carefully placed podiums and hands, they are captured conducting business as usual.

Conceived and executed by the Delta ad agency based in Quito, Ecuador, the Vanguardia Magazine campaign was creative directed by Pablo Mayoral with art direction and copywriting by Marcelo Calderón and Oswaldo Terreros. Provocatively and controversially created, the Vanguardia Magazine campaign will surely raise some eyebrows. It will also shock people into picking up a copy of the political publication. They won't know what hit them.
6.7
Score
Popularity
Activity
Freshness
Get Better and Faster