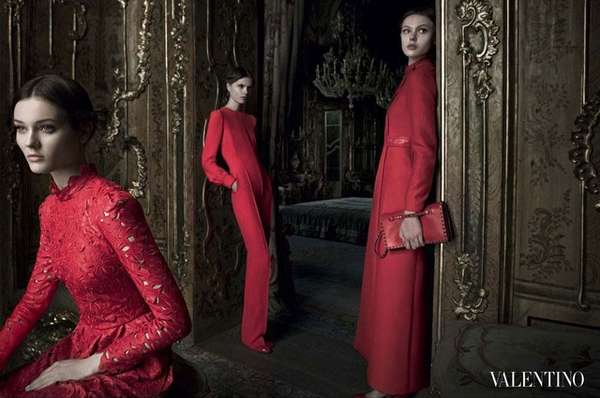 Meghan Young — June 28, 2012 — Fashion
References: valentino & fashiongonerogue
The demure and ladylike aesthetic of the gowns showcased in the Valentino Fall 2012 campaign are dramatically offset by the bright red color chosen for the photoshoot. More sorceress than socialite, models Frida Gustavsson, Jac Jagaciak and Caroline Brasch Nielsen sit or stand demurely as though waiting to enchant an unsuspecting man or two.

The Valentino Fall 2012 campaign was lensed by New York- and Mexico-based photographer Deborah Turbeville. Shot on location at the Sicilian Palazzo Valguarnera-Gangi in Palermo, Italy, the ad campaign is rich and mysterious. As though playing on the idea of the three witches, which is prevalent in many ancient legends and myths, the Valentino Fall 2012 campaign has a mystical quality that will charm onlookers right away.
3.7
Score
Popularity
Activity
Freshness