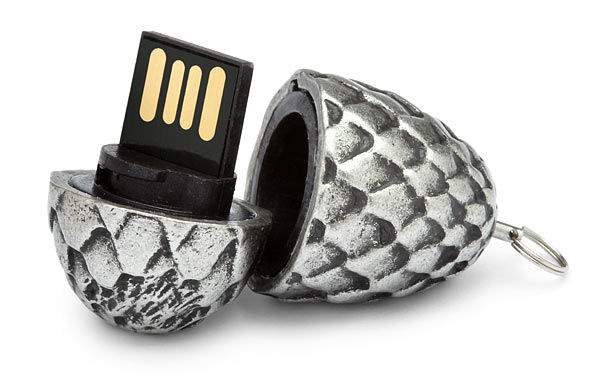 Alyson Wyers — October 30, 2014 — Tech
References: thinkgeek & 7gadgets
This Game of Thrones themed USB flash drive is intended to store data, not unhatched baby dragons. From ThinkGeek, the Game of Thrones Dragon Egg Flash Drive looks like a sterling egg as depicted in the popular HBO TV show. When the two halves are pulled apart you will find a memory stick. The other side has a ring so you can attach the device to your keychain or lanyard.

The waterproof USB flash drive is removable, very fast and extremely thin. The officially licensed Game of Thrones merchandise has 8 GB capacity and is made out of zinc alloy. The pineapple-resembling gadget is ideal for people who need to transfer tiles and are also fans of the fantasy series.
3.2
Score
Popularity
Activity
Freshness