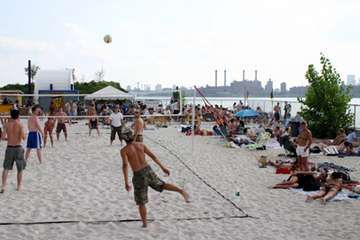 Sandy Summer Oases for City Dwellers Around the World

Kari Bauce — May 17, 2009 — Lifestyle
References: dailymail
Share on Facebook Share on Twitter Share on LinkedIn Share on Pinterest
As summer fast approaches, those who live in concrete jungles start dreaming of sandy beaches and turquoise waters. But with money tight and vacations expensive, those exotic locals may call, but you can’t answer. That’s when the urban beach steps in.

From Paris and Berlin to Toronto and New York, cities all over the globe have had great success with these sandy outposts where residents and tourists alike can come play volleyball, bask in the sun, dance to DJs, sip tropical concoctions and snack on beach treats. The Water Taxi Beach in New York’s Long Island City has been so wildly popular since opening in 2005 that this year it will get two siblings at the South Street Seaport and Governor’s Island respectively. So, even though Cap d’Antibes may not be on the agenda, you can still grab friends and some flip-flops and dip your toes in the sand while marveling at the city skyline.
1.1
Score
Popularity
Activity
Freshness
Attend Future Festival