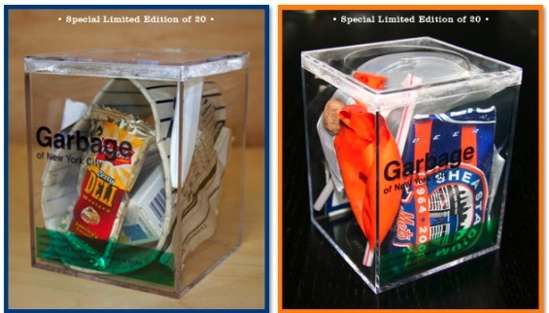 lourdes sanchez bayas — April 23, 2008 — Unique
References: nycgarbage & joshspear
Share on Facebook Share on Twitter Share on LinkedIn Share on Pinterest
We've previously told you can now buy trash from the streets of New York as Art. Well, after tremendous success, NYC Garbage has created niche packages. This time around, they are hawking garbage from Yankee Stadium, one of the oldest and most fabled sports arena in the US, as well as Shea Stadium, the less celebrated house of the New York Mets. Both stadiums are scheduled to close after the 2008 season and the teams will be moving to new venues.

The garbage comes in s see-through cube so that Yankees and Mets fans can have a one of a kind, fresh-picked souvenirs from one of their very last trips to their beloved arenas.

NYC garbage. I have said it before, and I will shout it again. If anyone feels like they must own some New York garbage, just give me a shoutout and I will gladly hook you up with some wicked trash, the likes of which you have never, ever seen. I am looking at some nasty stuff at this very moment, so just let me know.