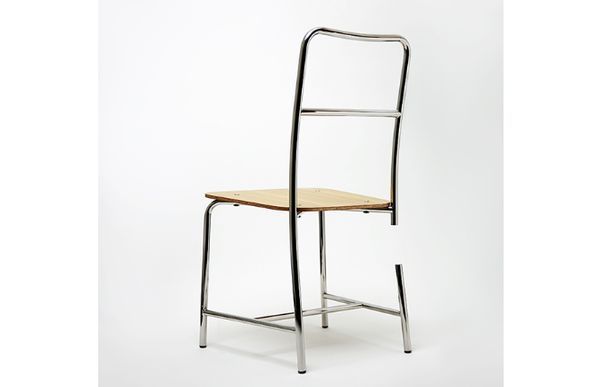 Amelia Roblin — November 8, 2013 — Art & Design
References: h220430.jp & yankodesign
Share on Facebook Share on Twitter Share on LinkedIn Share on Pinterest
In general terms, a chair is simply a chair, and seldom attempts to be anything other than a seating object. In the case of the Unusual Chair by h220430, we have a piece of furniture that's intended to function as a symbol of the current state of a country.

The designers began by creating a version of the archetypal chair, complete with a flat seat, a backrest and four supports beneath it. The frame has been manufactured of tubular steel for a nice slender profile, giving it a delicate appearance, despite the strength of the material.

Most notably, you'll see that one of the rear legs of the Unusual Chair by h220430 has been severed just below the wooden panel perch. The structure is sturdy enough to support the weight of a sitter, but it's symbolic of the physical and psychological damage done in Japan by the Fukushima nuclear disaster, as well as the potential for a great future.
1.1
Score
Popularity
Activity
Freshness
View Innovation Webinars