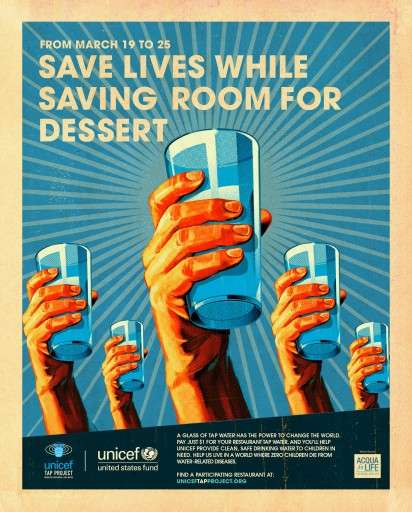 Meghan Young — February 16, 2012 — Marketing
References: droga5 & ibelieveinadv
Share on Facebook Share on Twitter Share on LinkedIn Share on Pinterest
The UNICEF Tap Project campaign was inspired by vintage propaganda posters. Instead of pushing the ideas of patriotism and war, this ad campaign urges people to drink water more responsibly, namely through taps instead of bottles. By doing so, people will be able to help bring clean and safe drinking water to children in need.

Conceived and executed by Droga5, an ad agency based in New York, United States, the UNICEF Tap Project campaign specifically promotes paying one dollar for tap water in restaurants between March 19th and March 25th. That dollar will go towards a greater cause, which hopes to create "a world where zero children die from water-related diseases," as stated in the ads.