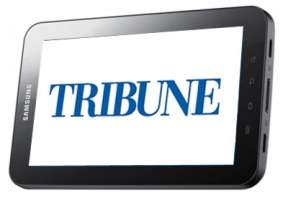 Omar Yusuf — August 10, 2011 — Business
References: cnn & gizmodo
Share on Facebook Share on Twitter Share on LinkedIn Share on Pinterest
The Tribune Tablet, a collaborative effort between media giant Tribune Co. and Samsung, is a long-awaited apology from the print industry, which is scrambling to maintain its relevance in a world where ink prices are rising, print sales are plummeting and tablet PCs are reigning.

Tribune Co., a media corporation which owns several national papers and dozens of TV stations, is in the same sinking boat as the rest of the print industry. The solution to their dilemma comes in the form of the Tribune Tablet, a touch-device which runs on a modded version of Google's Android platform and delivers local and international news to eager readers.

And the rub? The Tribune Tablet will be free for users who agree to a subscription or contract. For an international media mogul barely avoiding bankruptcy, Tribune Co. is making one smart move!
0.8
Score
Popularity
Activity
Freshness
Attend Future Festival