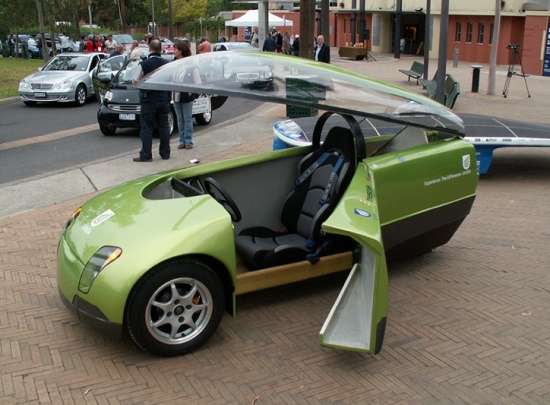 After spending several years in development, out spawn Trev, a three-wheeled green machine.

Fully electric and fully loaded, the Trev uses a 5th of the energy a conventional car does. Not only does it capture the sleek, sexy cutting edge design that consumers are craving these days, but the Trev also embraces the reality of having an environmentally-friendly car for the big city.

TrÃ¨s bien for those students!

Meant to be the ideal commuter vehicle, housing only two (tandem) seats and reaching a top speed of 75 Mph, (120kmph) the TREV will only have to be recharged after 93 miles (150 km), so you'll be able to make your A to B, and maybe even your C, a few times before you have to plug in and juice up.

Oh yah, I forgot, IT ONLY HAS 3 WHEELS! You'll never need to worry again about squeezing into that tight parking spot.

But hold on, I know what you're going to ask, why only two seats? Well the lovely students at the U of SA would like to remind you that 90% of urban trips are made with either one or two people in the car. Clearly answering your question and making that much more sense.