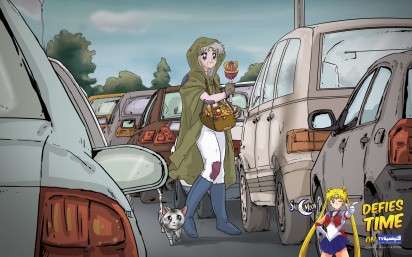 The Tounsia TV Campaign Shows That This Network Defies Time

Meghan Young — April 1, 2012 — Marketing
References: jwt & ibelieveinadv
Share on Facebook Share on Twitter Share on LinkedIn Share on Pinterest
The Tounsia TV campaign shows that this network, along with a few select others around the world, is bringing back retro cartoon shows from the '90s. By doing so, it defies time, as the ad campaign's tag line succinctly states. Funny enough, this tag line is paired with an imagined image of a few famous characters depicting what they would be doing and what they would look like when older. These characters are Sailor Moon, Captain Tsubasaa and Goldorak.

Conceived and executed by Tunis-based ad agency JWT, the Tounsia TV campaign is hilarious nostalgic. It's not strange for people to wonder what their favorite cartoon character could be up to even if they're not real. These print ads provide one possibility.