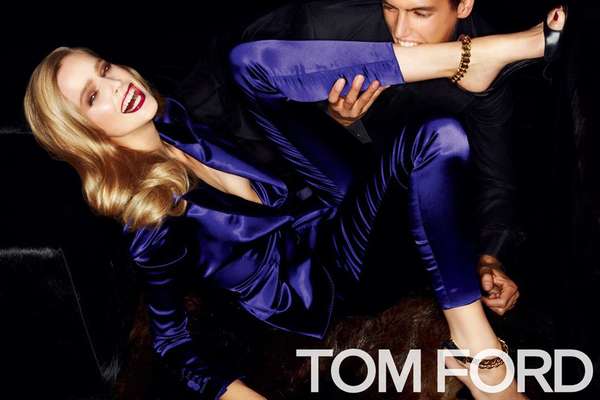 Meghan Young — January 11, 2012 — Fashion
References: tomford & fashiongonerogue
Share on Facebook Share on Twitter Share on LinkedIn Share on Pinterest
As glamorous and elegant as models Mirte Maas and Mathias Bergh look in the Tom Ford 2012 campaign, they shun the stoic statuesque poses often associated with these fashion designs. Instead, they succumb to their playful and loving sides as they laugh and tease for the camera.

Shot by Tom Ford himself, the Tom Ford 2012 campaign is infectiously happy. It showcases rich jewel tone suits, shirts and skirts that are perfect for the winter season, but the overall attitude speaks of spring. Essentially, this ad campaign bridges the gap between the two seasons beautifully.

Even though the Tom Ford 2012 campaign was shot in Palm Springs, California, the only sun present is in the two models' smiles.
1.7
Score
Popularity
Activity
Freshness
Jeremy Gutsche Keynote Speaker