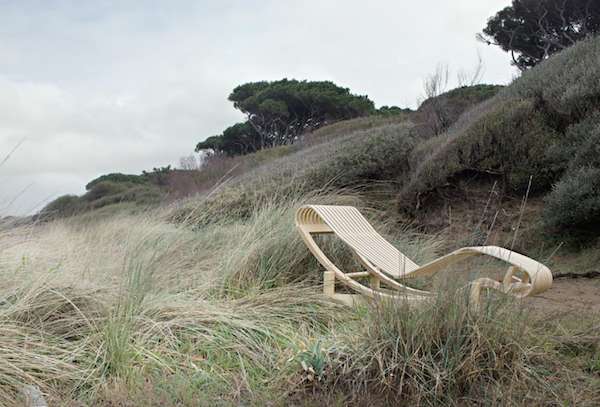 Meghan Young — November 28, 2011 — Art & Design
References: cassina & bookofjoe
Share on Facebook Share on Twitter Share on LinkedIn Share on Pinterest
Originally drawn in 1940, the Tokyo Chaise Longue is finally being manufactured. Stunning in its natural simplicity, it is surprising that this seat was never constructed before. Yet just like a deceased musician whose pre-recorded tracks are often released in post-humus albums, the same often happens in other industries as well.

In this case, the Tokyo Chaise Longue was designed by legendary French designer Charlotte Perriand. Produced by Vitra in collaboration with G-Star RAW for their exclusive nine piece collection featuring other trail-blazing designers, the Tokyo Chaise Longue is made out of 12 curved wooden strips in either teak, beech or bamboo. Available in five colors, it comes with a water-draining polyurethane upholstered and stain resistant polyester yarn coated mattress, which makes it perfect for the outdoors. Its sculptural presence would complement any home's natural surroundings.
0.8
Score
Popularity
Activity
Freshness
Get Trend Hunter Dashboard