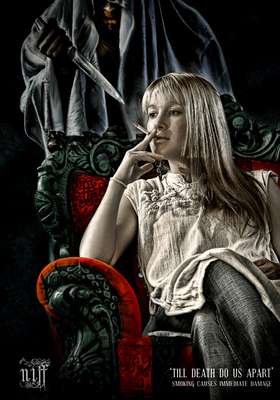 'Til Death Do Us Part

One HDR-style image features a female sitting in a blood red armchair smoking a cigarette, as death creeps in the shadows behind her, lurking mere inches above her as she indulges in the self-destructive motion. He holds a dagger, but he'll likely not have to use it as she is taking the killing into her own hands. In the second image, a man sits in the same blood-coloured armchair, also smoking, but death is represented by a priest reading from a holy book.