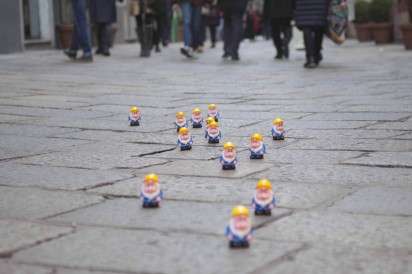 The TIKY ADV Campaign Illustrates the Motto 'Grow With Us'

Meghan Young — February 27, 2013 — Marketing
References: tikyadv & ibelieveinadv
Share on Facebook Share on Twitter Share on LinkedIn Share on Pinterest
While the TIKY ADV campaign could be documenting the start of a gnome invasion, there is a simpler and more realistic explanation for the horde of adorable dwarf figurines roaming around the urban streets of Milan, Italy. They are simply illustrating the company's motto, "Grow with us." The yellow-capped gnome happens to be the brand's mascot.

Created by the firm itself, the TIKY ADV campaign targets clients who have small and medium budget. A burgeoning communication agency, it is only natural that they would want to stay small until they, or their gnomes, have grown to be much more sizeable. As it is, since its founding back in 2009, TIKY ADV has worked for such companies as Armando Testa, FCA!, Leo Burnett, Red Cell and TBWA.
3.3
Score
Popularity
Activity
Freshness
Get Better and Faster