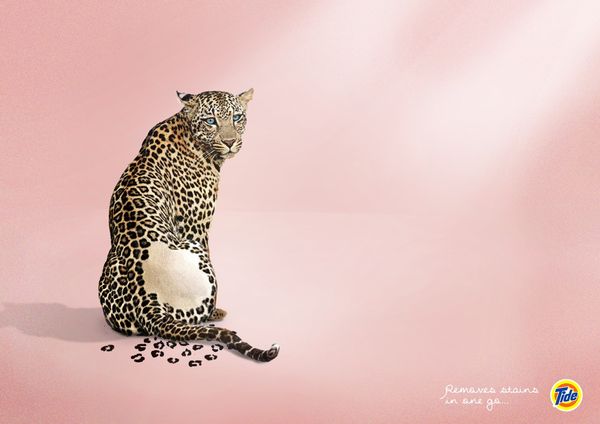 The Tide 'Removes Stains in One Go' Campaign is Surreally Minimalist

Meghan Young — February 11, 2014 — Marketing
References: linkedin & adeevee
Share on Facebook Share on Twitter Share on LinkedIn Share on Pinterest
Two things come to mind when taking in the Tide 'Removes Stains in One Go' ad campaign: surreal and minimalist. The first has everything to do with the fact that the cheetah, zebra and Dalmatian starring in each image has lost a patch of its iconically patterned fur while the latter is due to the simple albeit colorful backdrop they are captured against.

Creative directed by Tanja Siersbøl, a freelancer based in London, United Kingdom, the Tide 'Removes Stains in One Go' ad campaign is extremely eye-catching. Not only does it revolve around animals, which almost everyone loves, it embraces stylish patterns against clean pastel hues that will appeal to people's inner stylists. And, of course, it will get people thinking about removing stubborn stains on white shirts.
5.8
Score
Popularity
Activity
Freshness
Get the 2021 Trend Report FREE