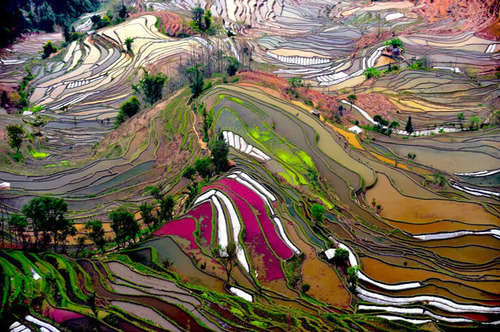 Thierry Bornier's Images of Hills and Skylines Are Incredible

Jordy E — October 12, 2012 — Art & Design
References: flickr & wgsn.tumblr
Photographer Thierry Bornier ended up taking pictures of Chinese landscapes after years spent in New York as a financial expert. The stress of his life propelled him to the Eastern front, and he has since made a commitment to explore his creative side in the Yunnan province.

Bornier's images of mountainside villages, green-hued lakes and mountain peaks are surreal to say the least. Much of his work resembles intricate oil paintings, providing a testament to the beauty of the region.

Intense wildlife captures are similarly central to Bornier's portfolio. Black and white seagulls abound his Flickr stream, taken at Yunnan's Cui Hu waters. He wouldn't be doing the province justice if he didn't focus on the people however, and he has managed to do just this with his portraits of Dongchuan and Guangxi residents.
6.2
Score
Popularity
Activity
Freshness