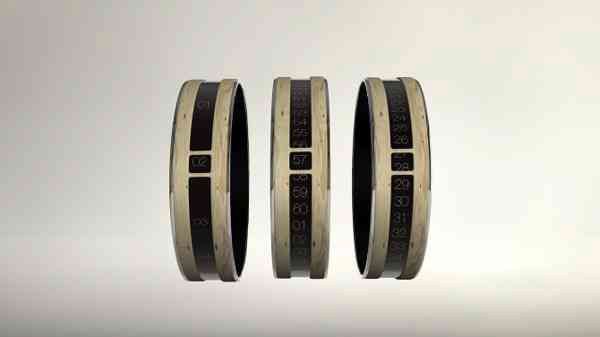 The Revolve can be Dismantled into Three Separate Time Units

Akihiko Tse — October 15, 2013 — Fashion
References: behance.net & yankodesign
Share on Facebook Share on Twitter Share on LinkedIn Share on Pinterest
Together, the Revolve works as a harmoniously distinctive watch, but once separated, the watch is daring as it is bold. Designed by Mircea Andronescu and described as simply a "little project" he's been working on, the Revolve is a bracelet-type watch that can easily be slid on to one's arm.

The watch has a small square, which is constructed from wood that encompasses the watch, where figures showing the time can appear through. What's neat about this watch is the fact that it can be divided into three separate units, with each component showing the hour, the minutes and the seconds separately.

Clasped together by magnets, the watch can easily be dismantled from its other components and be won individually, giving users the choice to just wear one rotating ring -- the second hand, if they're feeling particular adventurous -- according to their own preference.
1.8
Score
Popularity
Activity
Freshness
Jeremy Gutsche Keynote Speaker