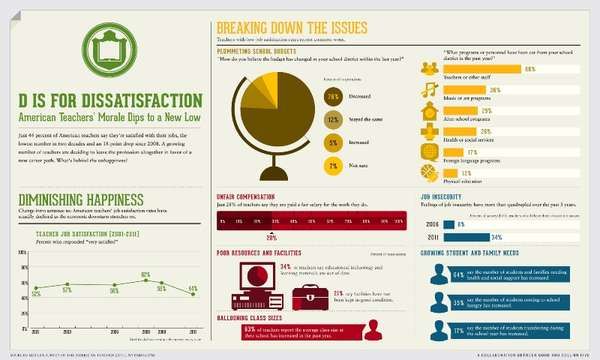 The Metlife Survey Looks at Why Teachers are Seeking Other Jobs

Sarah Nazim — June 18, 2012 — Social Good
References: metlife & awesome.good.is
Share on Facebook Share on Twitter Share on LinkedIn Share on Pinterest
The Metlife Survey of the American Teacher breaks down why US teachers are seeking other forms of employment due to low job satisfaction. The study reveals that only 44% are satisfied, which is the lowest statistic in the past two decades.

With the slumping and slow recovering economy, budget cuts have taken a toll on teacher salaries, which is a huge factor that contributes to the discontent. Budget cuts have also led to a diminished workforce as 66% have lost their jobs. While music and arts departments have also suffered, which in turn impacts the students as well, it is no wonder that 34% of educators feel that their industry is not secure.

Not only are budget cuts having an impact, but so is having to deal with students who are also suffering during these difficult times. This puts added pressure and stress on teachers. According to the Metlife Survey, 64% of students are without health and social support and a whopping 35% are malnourished and sent to school hungry.
2.2
Score
Popularity
Activity
Freshness
View Innovation Webinars