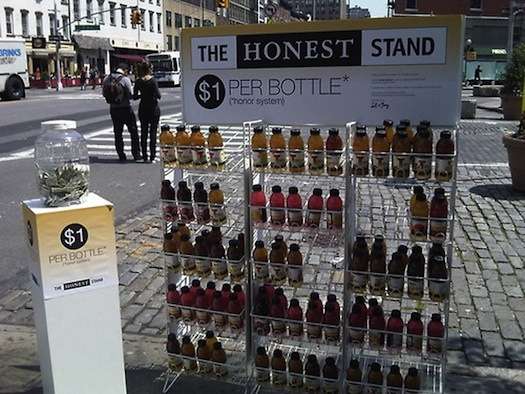 Meghan Young — March 10, 2011 — Lifestyle
References: honesttea & psfk
I have to wonder if in this day and age, the honor system would actually work, and The Honest Store puts that bit of wondering to the test. A guerrilla social experiment and street campaign for Honest Tea, it is a pop-up store that functions solely on the honor system.

Essentially, The Honest Store is unmanned and features a rack of Honest Tea bottles and a money box for one dollar payments. A hidden camera captures those who pay and those who don't. The experiment proved that 87 per cent of Americans were in fact honest! (Smiley face).

Not only did The Honest Store help realize the prevailing innate honor system of consumers, but it also improved Honest Tea's sales. The campaign itself garnered a lot of attention.
2
Score
Popularity
Activity
Freshness

'Pay What You Want' Pays Off (UPDATE)
Radiohead Nets 9.6 MM