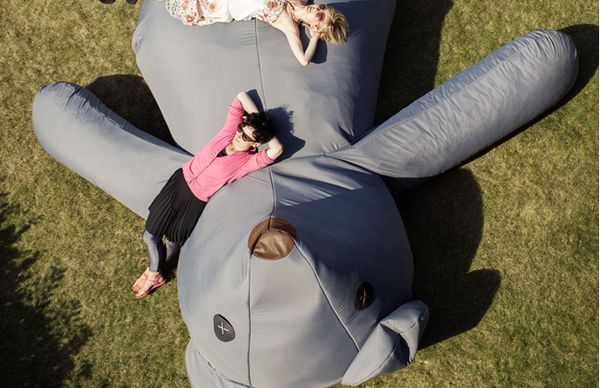 The Cuddly Project Presents Varsovians with a Familiar Public Friend

Amelia Roblin — October 8, 2013 — World
References: formyiksztalty.pl & fubiz.net
Share on Facebook Share on Twitter Share on LinkedIn Share on Pinterest
If you've ever been to Warsaw, Poland, you will have noticed that the vast majority of public monuments are of a historic and rather serious variety -- as one might expect after the events of the past century. You'd be quite surprised then to stumble upon The Cuddly: a giant teddy bear that invites intimate interaction and playful behavior.

From the Forms and Shapes Foundation, Iza Rutkowska has created this massive stuffed animal to be moved about the city to warm hearts and inspire people. In many cases, he's been set up in spots that have some cultural significance to citizens, yet this oversized toy works to soften the passer-by's perception. Essentially an endearing mammalian beanbag chair, The Cuddly welcomes residents to hug him, to lounge on him and to interact with fellow urbanites in his presence.
4.6
Score
Popularity
Activity
Freshness
Get Better and Faster