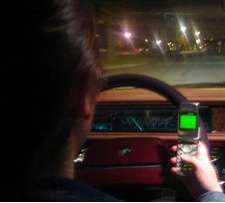 Trend Spotter — July 22, 2007 — Autos
References: engadget
Share on Facebook Share on Twitter Share on LinkedIn Share on Pinterest
Talking on the phone while driving is dangerous, but you can crank up the danger level even more if you text message while driving... For one young British woman, texting while driving has resulted in a prison sentence. Even worse, she killed someone while texting. Engadget reports, "Rachel Begg, who was found to have used her cellphone nine different times in the 15 minutes prior to crashing into a grandmother's vehicle and subsequently killing her, was recently found guilty and sentenced to four years in prison. To make matters worse, Begg was driving nearly 70 miles-per-hour on a dark, rainy night..."