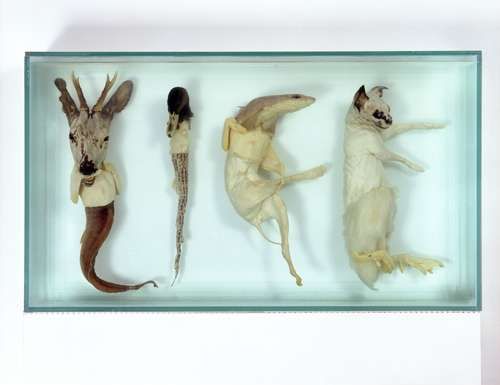 "Life Can Be So Nice" Dead Animal Font

In this piece, the Danish artist's dead animals, having been through the taxidermy process, are used as a really messed up dead animal font. Animals such as little pigs, snakes, birds, and other small creatures are combined into new species and posed to spell out a refrain from the Prince song "Life can be so nice."

Not really sure where the Prince song comes in, but even without this knowledge, I think it makes a really strong statement.

If I had to choose one aspect of this piece that made my flesh crawl, it would most certainly by the owl head used as the 's' in 'so'.
4.7
Score
Popularity
Activity
Freshness
Attend Future Festival