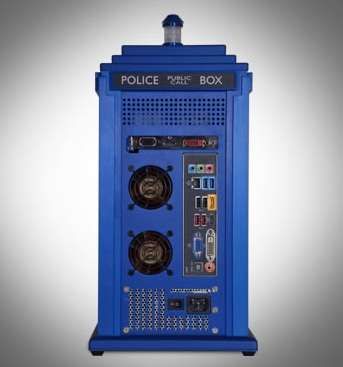 Painstakingly modeled by British PC maker Scan after the time-travelling TARDIS on the popular Britsh show, the case looks identical to the Doctor’s time hopping vehicle. Since the TARDIS itself is a powerful machine, it’s only appropriate that the TARDIS PC would be a powerful machine to match. Beyond the clever Blu-Ray writer behind the Police Box sign, the guts of the computer are very powerful as well. The TARDIS PC comes with a dual core 3.1 gHz processor, 8 GB of RAM, a 500 GB hard drive and loaded with Windows 7 Premium. The case itself is made out of 45 pieces of molded aluminum so it’s as sturdy as it is striking.

The details on the case itself are exactly as appears on the show, which is to be expected since this PC is officially licensed by the BBC.