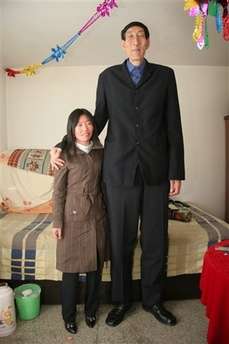 Xishun was officially ranked world's tallest human by Guinness Book of World Records last year. His bride, Xia Shujian is of average height, yet at 5'6â€, is still only half his size.

Shujian, 28, and Xishun are both from the Chinese city of Chifeng. The couple found each other after he launched a series of international classified ads in search of a partner. A Beijing newspaper says, â€œAfter a long and careful selection, the effort has been finally paid off.â€

This isn't the first time Xishun has made headlines, however. He gained fame last December when the Chinese media reported his success at rescuing two dolphins that had ingested plastic in a Liaoning province aquarium.

Vets failed miserably when they attempted to save the porpoises who had become sick after nibbling on the edges of their tanks. Trying to surgically extract the synthetic substances posed quite a problem; each time the instruments were inserted, their stomachs would contract.

Xishun was there to save the day though. Using his extraordinarily elongated arms, he was able to pull the plastic out from inside the bellies of the aquatic mammals and was hailed a hero by the Chinese media.