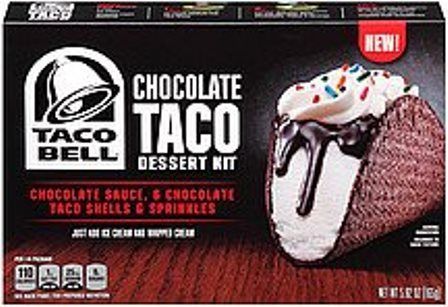 Michael Hines — October 13, 2013 — Lifestyle
References: thatsnerdalicious & foodbeast
Share on Facebook Share on Twitter Share on LinkedIn Share on Pinterest
The Choco Taco is easily one of the most delicious desserts ever created, and now Taco Bell is giving you the chance to make your own at home with the Taco Bell Chocolate Taco Kit. The kit comes with everything you need (sans ice cream) to make a dessert taco, including: chocolate shells, sprinkles and chocolate sauce.

In addition to the Taco Bell Choco Taco Kit, the fast food company is also selling cinnamon shells. The reception of the new kit by Internet food bloggers has been decidedly mixed, with some decrying the shells for their relative lack of strength and taste. However, unless you plan on buying a waffle iron, then there doesn't appear to be an easier way to make a delicious Choco Taco on the fly. The kits have been sighted at Wal-Mart and are said to be priced at $3.
3.6
Score
Popularity
Activity
Freshness
Jeremy Gutsche Keynote Speaker