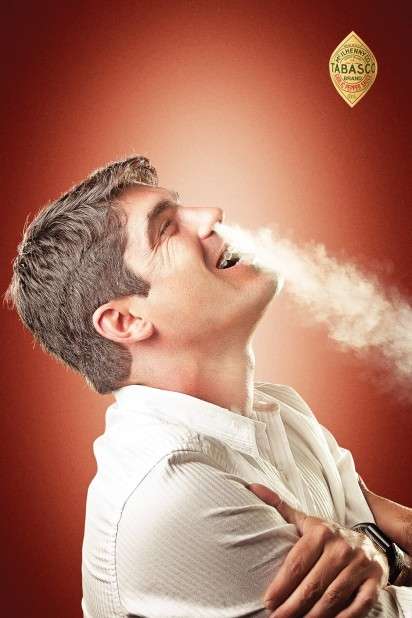 Meghan Young — February 10, 2012 — Marketing
References: housecomunicacao & ibelieveinadv
Share on Facebook Share on Twitter Share on LinkedIn Share on Pinterest
The Tabasco Garlic Pepper Sauce ad campaign centers around a classic interpretation of hot sauces. It depicts steaming nostrils and mouths in an obvious attempt to show just how spicy this particular hot sauce is. Thankfully, it never gets old. Instead, it playfully conveys what a person can expect when drizzling a bit of this new flavor on their meals.

Conceived and executed by House Comunicação, an ad agency based in Brasília, Brazil, the Tabasco Garlic Pepper Sauce ad campaign may be hot to look at, but it has an otherwise minimalist aesthetic. Aside from the steaming models, the print ads feature a simple backdrop, which happens to be the exact same color as the hot sauce.