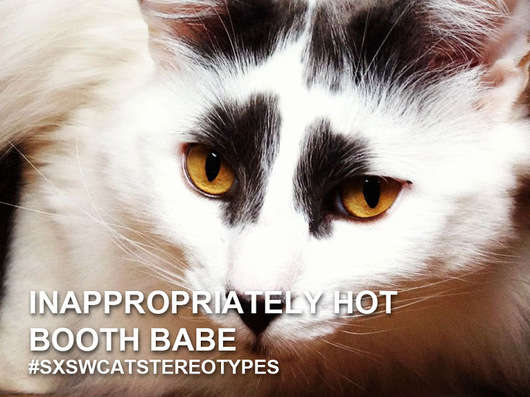 Meghan Young — March 8, 2013 — Art & Design
References: tractionco & adrants
Share on Facebook Share on Twitter Share on LinkedIn Share on Pinterest
For those who have never attended the largest musical festival in the world, or those who have and are looking for a good nostalgic laugh, the SXSW Cat Stereotypes provide a hilarious summery of all the characters that often show up to it. From the futurist keynote speaker to the inappropriately hot booth babe and, of course, to keep up with the times, the harlem shakers, some people will find the audience more entertaining than the performers they paid to see.

Created by Adam Kleinberg of Traction, a marketing agency based in San Francisco, California, the SXSW Cat Stereotypes is a play on the Internet's obsession with cat memes. Who doesn't like to fawn over crazy cats with equally crazy captions? Especially when they involve real-life scenarios?
3
Score
Popularity
Activity
Freshness
Jeremy Gutsche Keynote Speaker