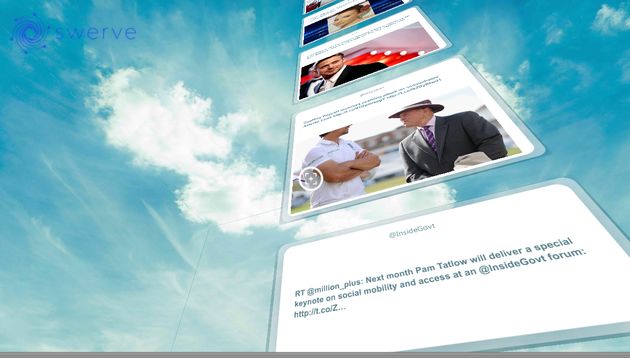 Meghan Young — June 12, 2015 — Tech
References: swervevr & psfk
Share on Facebook Share on Twitter Share on LinkedIn Share on Pinterest
The Swerve app shows just how close the world is to embracing virtual reality on a more domestic level. With the recent announcement of an Oculus Rift Consumer Edition as well as all of the affordable cardboard options out on the market, the Swerve app is a natural evolution of this next generation technology.

Essentially, the Swerve app is a virtual reality social media platform. It allows users to monitor their Twitter feeds in a virtual space. Why? It's not only a dynamic interpretation of such platforms, but also a handsfree alternative to traditional browsing.

The Swerve app was developed by London-based Fourthwall. Although Twitter is the first one to jump on the virtual reality bandwagon, it's clear that Facebook, Instagram, Snapchat and more can utilize the technology even more.
2.5
Score
Popularity
Activity
Freshness
Attend Future Festival