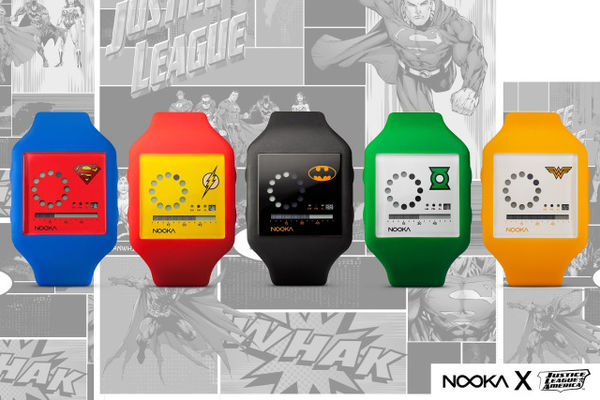 Megan Facciuolo — April 9, 2014 — Fashion
References: nooka & hiconsumption
Share on Facebook Share on Twitter Share on LinkedIn Share on Pinterest
New York-based watch manufacturer Nooka has joined forces with the company that employs fictional crime-fighters, DC Comics, to create a line of superhero watches. DC Comics approved a fully licensed set of superhero-inspired watches to be made by Nooka, just in time for the summer season and its superhero blockbusters.

Some gentlemen like to stick to sophisticated, leather or gold watches to match their suits, but this line will probably attract more attention. The watches are brightly colored to replicate each Justice League character's uniform. The several different watches resemble Superman, The Flash, Batman, Green Lantern and Wonder Woman.

Unfortunately, they are only available in the Asian markets at the moment, but I'm sure with their success and the influence of crazy North American fandom that the watches will make their way overseas.
4.2
Score
Popularity
Activity
Freshness
Access Advisory Services