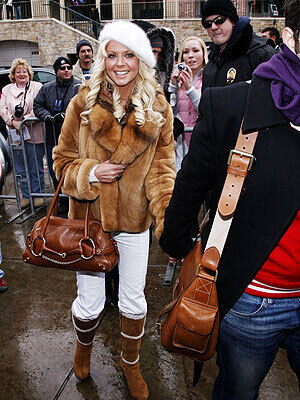 Celebs at the 2008 Film Festival

Bianca — January 22, 2008 — Fashion
References: link.brightcove
Share on Facebook Share on Twitter Share on LinkedIn Share on Pinterest
The Sundance Film Festival is known for bringing out not only journalists and movie buffs, but some of the world's top celebrities and most fashionable people. Unlike most major VIP events, Sundance doesn't take place in a warm climate or season, so it's one of the best events to seek sartorial inspiration for chillier months. And, again unlike most events, the Park City, Utah event is distinctly known for its casual dress code, allowing fashionistas to check out some non red carpet styles they might actually be able to wear.

Tara Reid wore crisp white pants and a matching fuzzy, floppy hat which she paired with beautiful shades of brown. She looks like a Michael Kors ad come to life! If PETA was there, she would not have been able to get away with her plushy fur jacket. She looks well put together, yet a little over dressed for Sundance.

Paris Hilton was seen wearing a pink toque (hey, I'm Canada, what can I say?) and a baby pink T-shirt bearing an cartoon illustration of herself. She was wearing white sunglasses, and carrying a pink pashmina that matched the lining of her white jacket.

Jessica Alba was bundled up in a white jacket, big sunglasses and had beau Cash Warren in tow.

For more, check out the video from Hollyscoop who checked out the fashions on the street!