Top 35 Furniture Trends in May 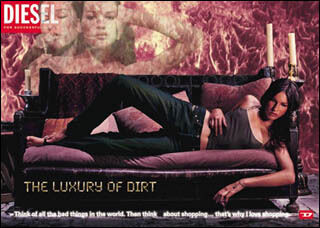 The collection, "Is built around a rock 'n' roll and casual living concept, which incorporates Diesel's trademark style and attitude," the press release says.

"All the iconic brand's core values - its rebelliousness, irony and irreverence! - have been translated into a new textile collection characterized by innovative, creative design, yet timeless vintage appeal, combined with an ultra-modern and quirky twist."

If they apply similar viral marketing tactics to their home collection as they have to their fashion campaigns, there's no doubt the line will be a tremendous success.

The line was launched this week after an ultra hip party at Salone Del Mobile, the Diesel penthouse which overlooks Milan. The hotspot was decked out in ultra funky decor while simultaneously showcasing the fabulous new Successful Living collection.

After that event, the party moved to the 'Special kubik Club,' a "unique party project" (not just a party, it's a project!) organized by Balestra Berlin, Modulorbeat and light designer Andreas Barthelmes.