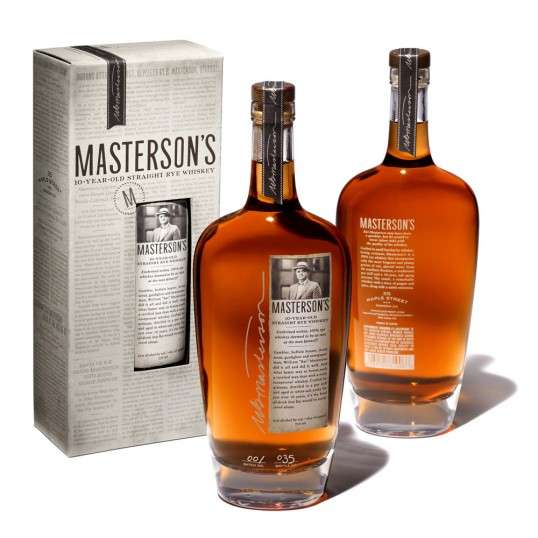 Susan Keefe — February 16, 2012 — Lifestyle
References: studio32north & lovelypackage
Share on Facebook Share on Twitter Share on LinkedIn Share on Pinterest
The makers of Masterson's Rye Whiskey enlisted the creative help of design firm Studio 32 North to craft an eye-popping vessel for the brands premium hooch. Together, they gathered inspiration from the whiskey's namesake Bat Masterson, a legendary figure from the American Wild West era. In his lifetime Bat Masterson was a US Marshall, a buffalo hunter, a frontier lawman and a sports editor and columnist. With such a rich history to pull from, it's no wonder that the results of Studio 32 North's efforts are astonishing.

The bottle itself gets its style from 19th-century whiskey flasks. The rich color of the whiskey is left to do the talking, as the label itself resembles a slender newspaper clipping. The box it comes in is equipped with a small window matching the shape of the label, while the rest is covered in news print that relays the story of Bat Masterson in period-specific language.

Exuding mystique and legend, the Masterson's Rye Whiskey packaging does justice to the wild life that inspired it.
3.1
Score
Popularity
Activity
Freshness
Get Trend Hunter Dashboard