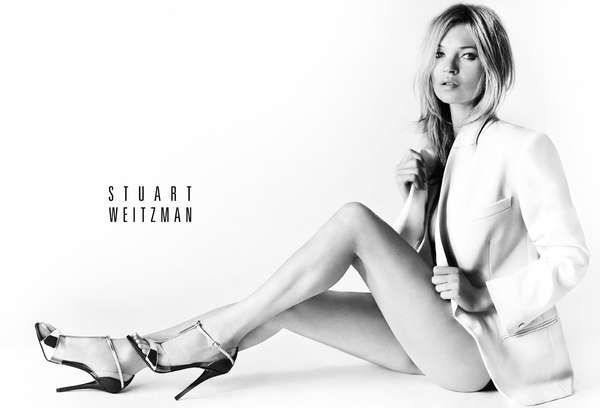 Meghan Young — June 29, 2013 — Fashion
References: stuartweitzman & fashiongonerogue
Share on Facebook Share on Twitter Share on LinkedIn Share on Pinterest
Perhaps the pant-less fashion fad that was recently adopted by Miley Cyrus this week will take off after women see supermodel Kate Moss in all of her leggy glory in the Stuart Weitzman Fall 2013 ad campaign. Shot in black and white, there is a classiness to the skin-revealing looks that was pretty much absent in Miley's outfits. Of course, the latter was going for a much funkier look.

In this case, the Stuart Weitzman Fall 2013 ad campaign showcases a range of sexy and sophisticated footwear perfect for the cooler season. From thigh-high boots to gladiator sandals and stiletto heels, the line is fit for the fall femme fatale.

The Stuart Weitzman Fall 2013 ad campaign was shot by famed photographer Mario Testino. Moss says, “Shooting the campaign with Mario is always fun and, with such a great team, it really doesn’t feel like work.”
6
Score
Popularity
Activity
Freshness
Get the 2023 Trend Report FREE