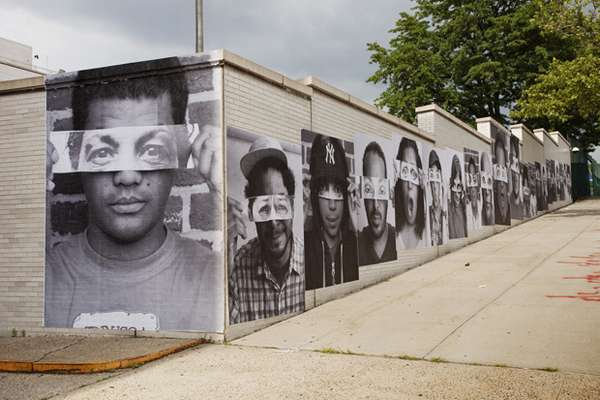 Jordan Sowunmi — June 28, 2011 — Art & Design
References: jr-art.net & hypebeast
Share on Facebook Share on Twitter Share on LinkedIn Share on Pinterest
French photographer/street artist JR is one of the burgeoning subculture's most respected talents for his artwork many view as a form of political protest, and his latest work 'Inside Out' continues his streak of creating challenging art by focusing on the predicament of the underprivileged.

JR's 'Inside Out' is a series of features a series of massive mural-like photographs posted on buildings around New York City, each creation serving as a protest piece aimed at raising awareness on the plight of Dakota Native Americans.

As a street artist, JR began his career in the early 2000s and made his first international impact with his 'Portraits of a Generation' series between 2004 and 2006, which saw him travel around Paris posting large (illegal) photos of young people from Paris' various housing projects. In the following seven years, JR has released a staggering six books and created dozens of projects across the world.

For his work as a street artist, JR received one of the coveted TED prizes 2011 this past March, garnering the semi-anonymous street artist $100,000. JR's work will be exhibited next at the La Villette art museum in September 2011.

Implications - In the last few years, street art and graffiti have moved from shunned subculture to a viable and burgeoning part of the art movement. Any company seeking credibility in the artworld would be wise to form a partnership with an accomplished or talented street artist, and allow them to create murals or pieces as advertising for the company. By attaching their brand to a developing art movement, the company shows they are on the forefront of contemporary pop culture and the art community.
3.6
Score
Popularity
Activity
Freshness
View Innovation Webinars