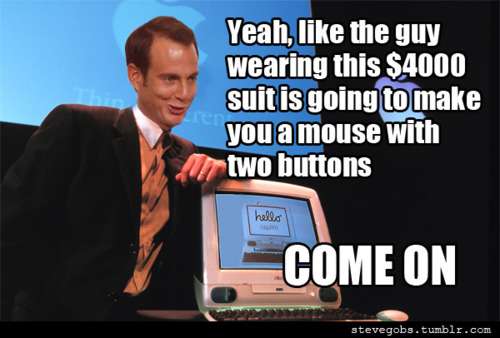 Rebecca Byers — December 27, 2011 — Pop Culture
References: stevegobs.tumblr
Share on Facebook Share on Twitter Share on LinkedIn Share on Pinterest
In what feels like two awesome worlds colliding, a new blog titled 'Steve Gobs' features photos of Steve Jobs and Will Arnett's hilarious character Gob from Arrested Development. There are lots of blogs out there offering a wide variety of potential for new memes, but this one combines two of my favorite men (despite one being a fictional character).

With the description: "CEO, Ladies man, Magician," Arnett's face is photoshopped onto photos of Jobs with some of Gob's best lines, including, "No, I was ashamed to be seen with you. I like being seen with you!"

While there are only a few so far, it seems to be gaining popularity. Hopefully there is more to come soon.
3.6
Score
Popularity
Activity
Freshness
View Innovation Webinars