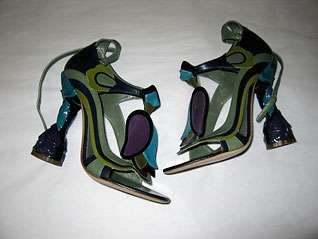 Lauren G — March 23, 2008 — Fashion
References: vogue
Share on Facebook Share on Twitter Share on LinkedIn Share on Pinterest
The statement shoe trend began when Miuccia Prada observed, "The obsession with handbags has finished a little now. It feels over. It's about shoes." Gaia Geddes, executive fashion and jewellery editor at Harper's Bazaar, explains: "I think everybody has bag overload. The 'bag of the season' concept meant that we were almost being dictated to as to which bags to like. These "It" bags are often copied in counterfeit versions that are very readily available. I do not want to be on the Tube and look around to see a WAG on the front of Hello! with my bag, as well as some trendy student sitting next to me with a fake version."

And so for spring, the statement shoe is boldly hued and textured, wittily heeled (see Prada, Pucci, Chanel, ChloÃ©, Sergio Rossi), eccentrically shaped (none more so than Alexander McQueen's chopines), and lavish on the dÃ©cor. "Gone are the days of Vivienne Westwood being the only extreme-shoe producer - now they are all at it," says Gaia Geddes. "Platforms, wedges, enormous block heels, and even heel-less heels are de rigueur. It may have something to do with models not being as tall as they used to be in the Eighties, or that the clothes are becoming more couture-like, which means you need a stronger shoe to balance the look.