The True Benefits of Social Media 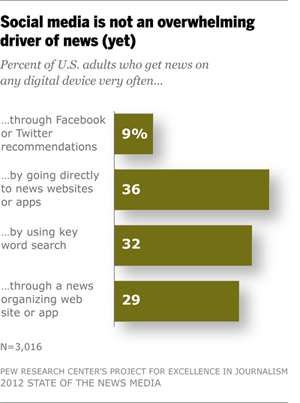 Pew ‘State of the Media 2012 Report' is Startling

Jordy E — March 20, 2012 — Social Media
References: stateofthemedia.org & mashable
Share on Facebook Share on Twitter Share on LinkedIn Share on Pinterest
The Pew ‘State of the Media 2012 Report’ is part of an annual project that aims to assess the condition of American journalism. Its broad evaluation of social media tools has made the survey a critical source of information for anyone interested in the online industry, especially those with a stake in the digital world.

The findings of the Pew State of the Media 2012 Report are worthy of some eyebrow raising. In line with the world’s expanding online community are Pew’s findings that both Facebook and Twitter have extended their network base. Given Facebook’s personalized slant, it is also fitting that the greatest amount of time is spent on this website among all American social media users.

While these findings are relative to the social media upswing, the Pew State of the Media 2012 Report revealed that in terms of news dissemination, Facebook and Twitter have yet to reign supreme. Statistically speaking, a meager 9% of online users in the U.S. claimed to receive the majority of their news from social media domains. It would thus appear that, while these realms are on the rise, they have yet to become forerunners of the news.
4.1
Score
Popularity
Activity
Freshness
Get Trend Hunter Dashboard