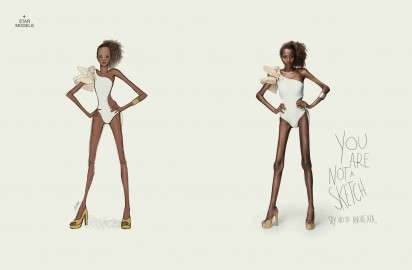 The Star Models Campaign Tells Women They "Are Not a Sketch"

Meghan Young — April 17, 2013 — Lifestyle
References: ibelieveinadv
From afar, it might not seem as though anything is wrong with the girls in the Star Models campaign. If there was any additional photoshopping done, no one would have suspected a thing. Nevertheless, the people behind this campaign do not want to hide anything; instead they bring attention to the continued prevalence of anorexia in the modelling industry.

The Star Models campaign was created by Brazil-based ad agency Revolution. It reads, "You are not a sketch." This tag line is disturbingly illustrated with a side-by-side comparison of a fashion sketch and the real-life model trying to imitate it, right down to the pencil-thin limbs drawn. Becoming a husk of a human being, these models need to 'say no to anorexia.'
6.9
Score
Popularity
Activity
Freshness