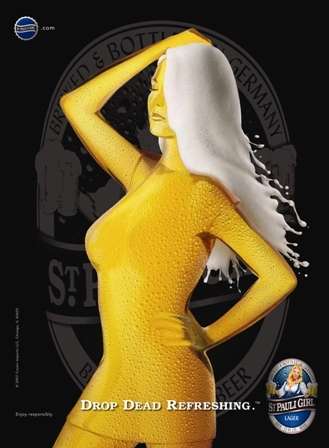 Can You Guess Who?

POPEYE — March 6, 2007 — Marketing
References: stpauligirl & brandweek
Share on Facebook Share on Twitter Share on LinkedIn Share on Pinterest
Guess who is the barmaid in new advertising campaign "Drop Dead Refreshing" from St. Pauli Girl Beer? The latest St. Pauli beer campaign features a famous model who has been morphed into beer. She is said to be "renowned and popular" but they aren't telling us her name. Her identity will be revealed in the spring.

Brandweek tells us, "The executions show a female form in attractive poses and morphed into a beer image. The form is derived from photographs of a popular model whose identity will be revealed during the spring, according to the brewer. Support will include outdoor ads in Baltimore, Chicago, Las Vegas, Miami/Fort Lauderdale, Philadelphia, Providence, R.I., San Francisco, San Jose, Calif., Seattle and Tampa/St. Petersburg, Fla. This campaign takes the highly successful 2006 campaign to a new level and introduces our new tagline which reflects the essence of the brand along with St. Pauli Girl's edgy sense of humor," said Fred Graefenhain, vp of St. Pauli Girl's importer, Chicago-based Crown Imports. St. Pauli Girl spent $4.4 million on advertising in 2005, and $4.0 million in 2006, per Nielsen Monitor-Plus."
4.2
Score
Popularity
Activity
Freshness
Get Better and Faster

28 Super Saints
From Saint Nick to Saint Patty, We Have Them All Covered