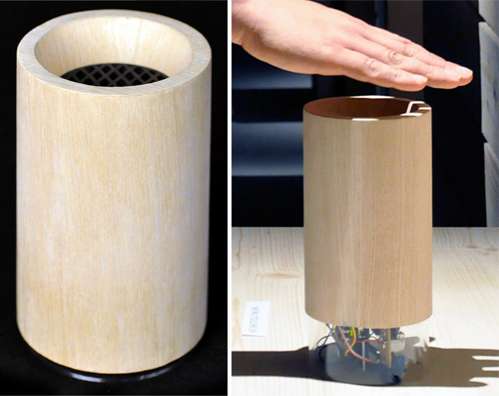 The Soundsitive Speaker Makes You Look Like a Magician

Meghan Young — July 20, 2011 — Art & Design
References: karichdesign & ohgizmo
Share on Facebook Share on Twitter Share on LinkedIn Share on Pinterest
Although almost all devices and gadgets are embracing touch technology to give it that modern, even futuristic, look and feel, the Soundsitive Speaker is embracing what will probably be the next step: gesture technology. Instead of leaving those greasy fingerprints all over your expensive and beloved techy possessions, the Soundsitive Speaker shows you another way to go about using them.

Created by industrial designer J.C. Karich, the Soundsitive Speaker debuted during the Designlab show in Paris earlier this year. Although the Soundsitive Speaker doesn't look very impressive from the outset since it sports a simple, circular wooden look, it does impress due to its apparent levitating function. As though making the user seem like a magician, the Soundsitive Speaker's wooden sleeve raises and lowers to control the volume by gesture. You can skip through songs by swiping your hand over the speaker as well.
0.5
Score
Popularity
Activity
Freshness
Attend Future Festival Virtual