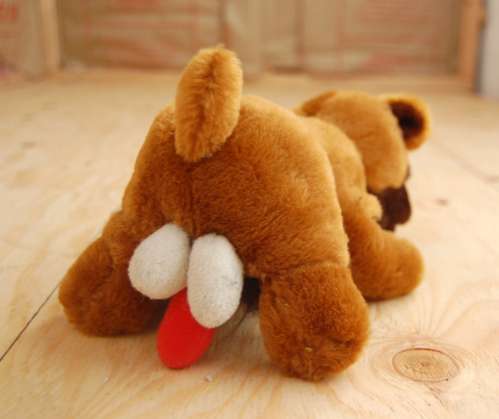 The ‘Soft but Lonely' Tumblr Lets You Adopt Anatomically Correct

Taylor Keefe — February 9, 2012 — Naughty
References: softbutlonely.tumblr
The Tumblr called ‘Soft but Lonely’ is a hilarious service that lets consumers adopt a deserted plushy. Each plushy comes with its own profile, written in first person, outlining why it should be chosen. There’s one more comical twist: each stuffed animal is equipped with male genitals.

The stuffed animals available on the ‘Soft but Lonely’ Tumblr may not be the best toy for children to play with. However, if your significant other can take a joke, then adopting one of the many hilarious plushies from ‘Soft but Lonely’ is worth checking out. Each toy has a personalized account, giving funny details about itself. As one animal describes, “Hi, I’m Burt. I have so much to offer you intellectually, sensually, and as a friend. It would be my pleasure to make your acquaintance, to get to know you, to see if you have something that is worth developing.”

On top of the hilarious profile descriptions, each doll has male genitals, which if left on display in one’s living space, may cause visitors to think you're sick in the head.

With Valentine’s Day just around the corner, what better way to show the love than a plushy from ‘Soft but Lonely.’
6.4
Score
Popularity
Activity
Freshness